at the Alpine Restaurant on Asfordby Hill, Melton Mowbray

Our end of Season Awards took place on Saturday 19th October at The Alpine Restaurant at The Grange on Asfordby Hill. The restaurant has a ski lodge feel to it with wooden clad walls and sofas around a fireplace which gives it a warm intimate feeling.

“Delighted to be hosting @MeltonCricket Presentation Evening on Saturday alongside @olliefreck 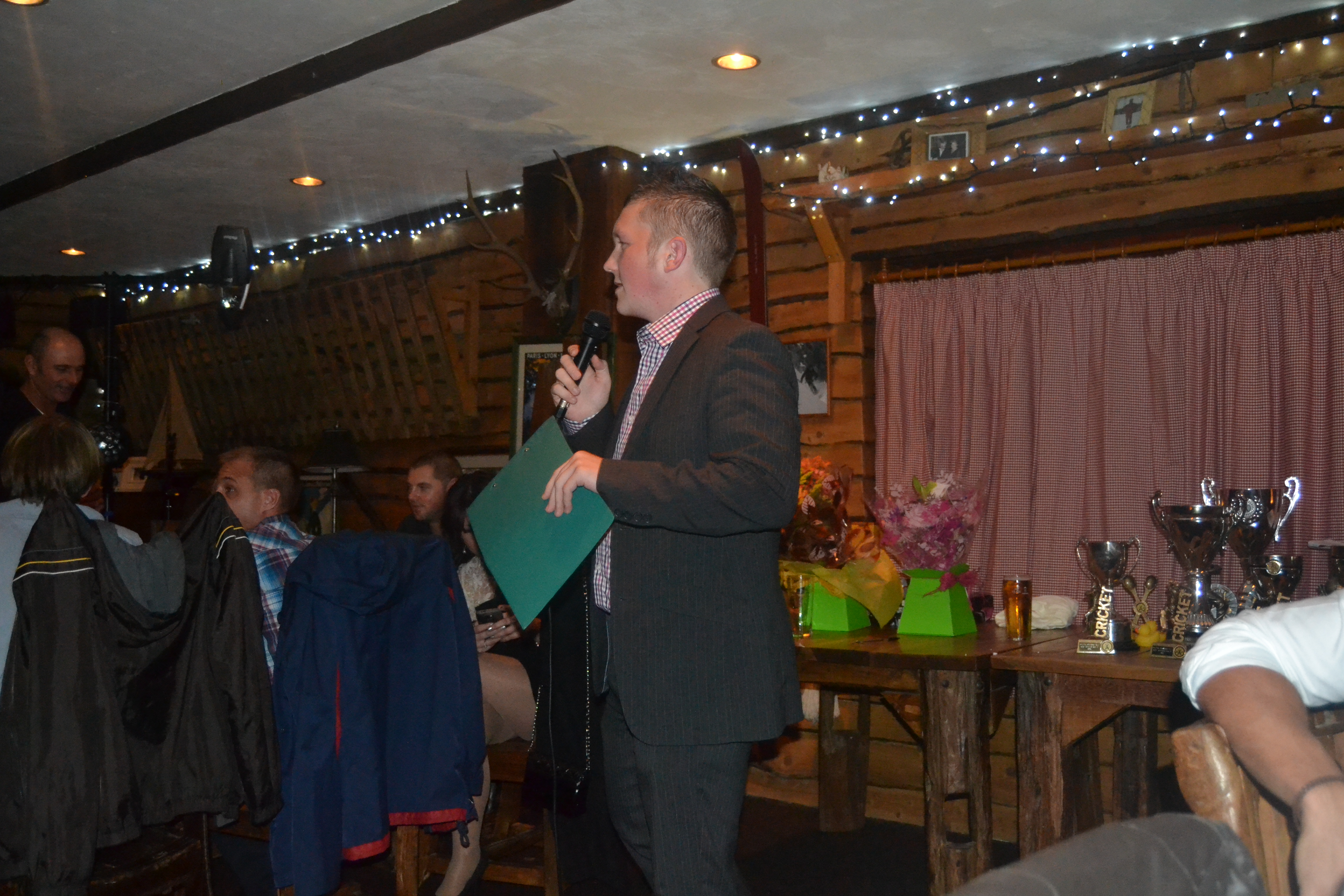 As guests arrived they voted for ‘players player’ awards and the ‘Clubman of the year’. After drinks, dinner was served at 8pm.

The atmosphere was bubbly and the service was very professional  and friendly throughout and everyone was ready for Presentation when Jonny Mac stood up to address the audience.

With Jonny was Club Chairman Jamie Culy, in his first year as Chairman has made a big impression with this important role. 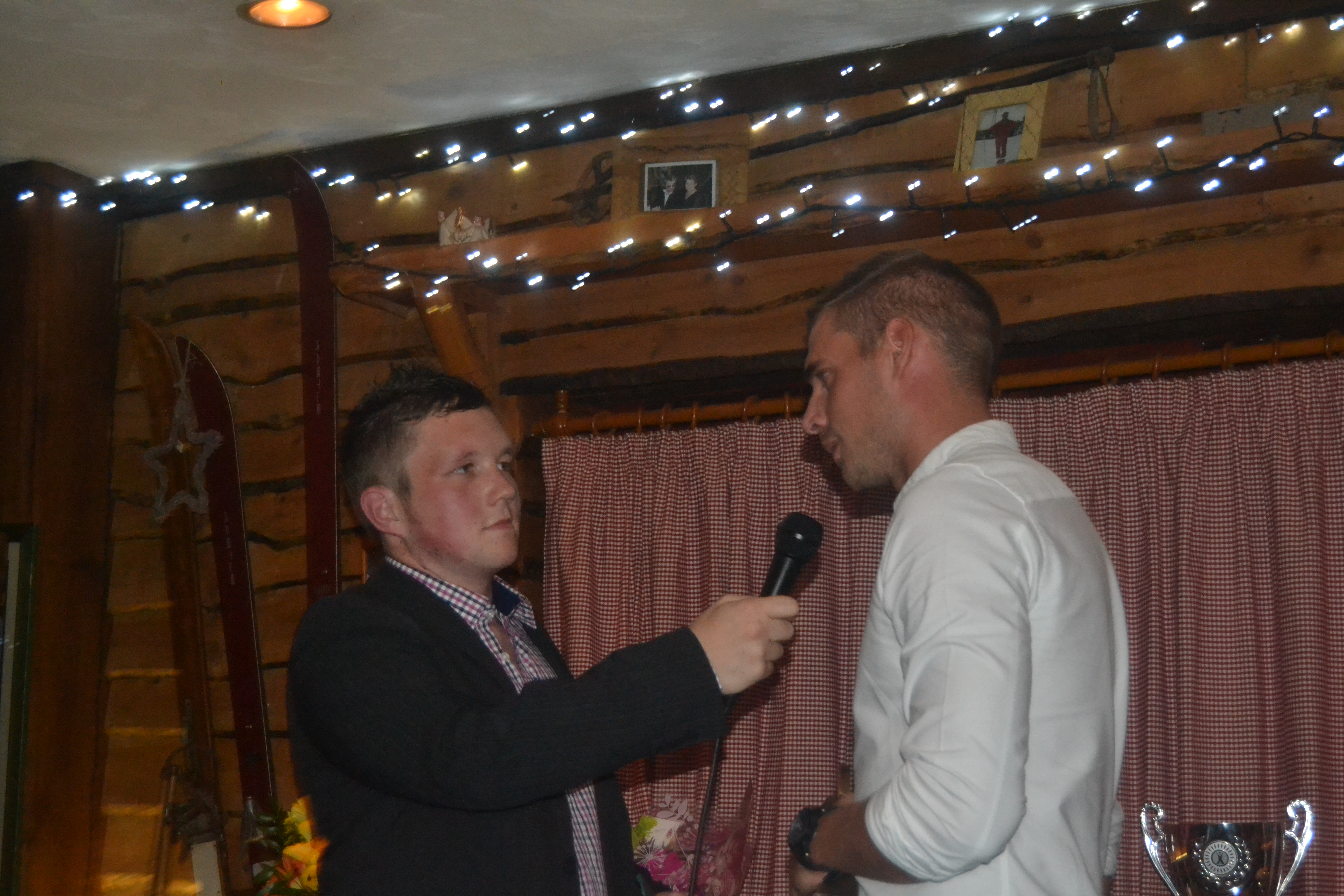 A warm and long applause greeted Ollie as he joined Jonny Mac on stage.

Jonny congratulated Ollie on his successes this year and on the new 2 year contract he’d agreed this week.

Comfortable taking questions, Ollie spoke of his will to do well over the next two years and the preparation which starts in the gym very soon. 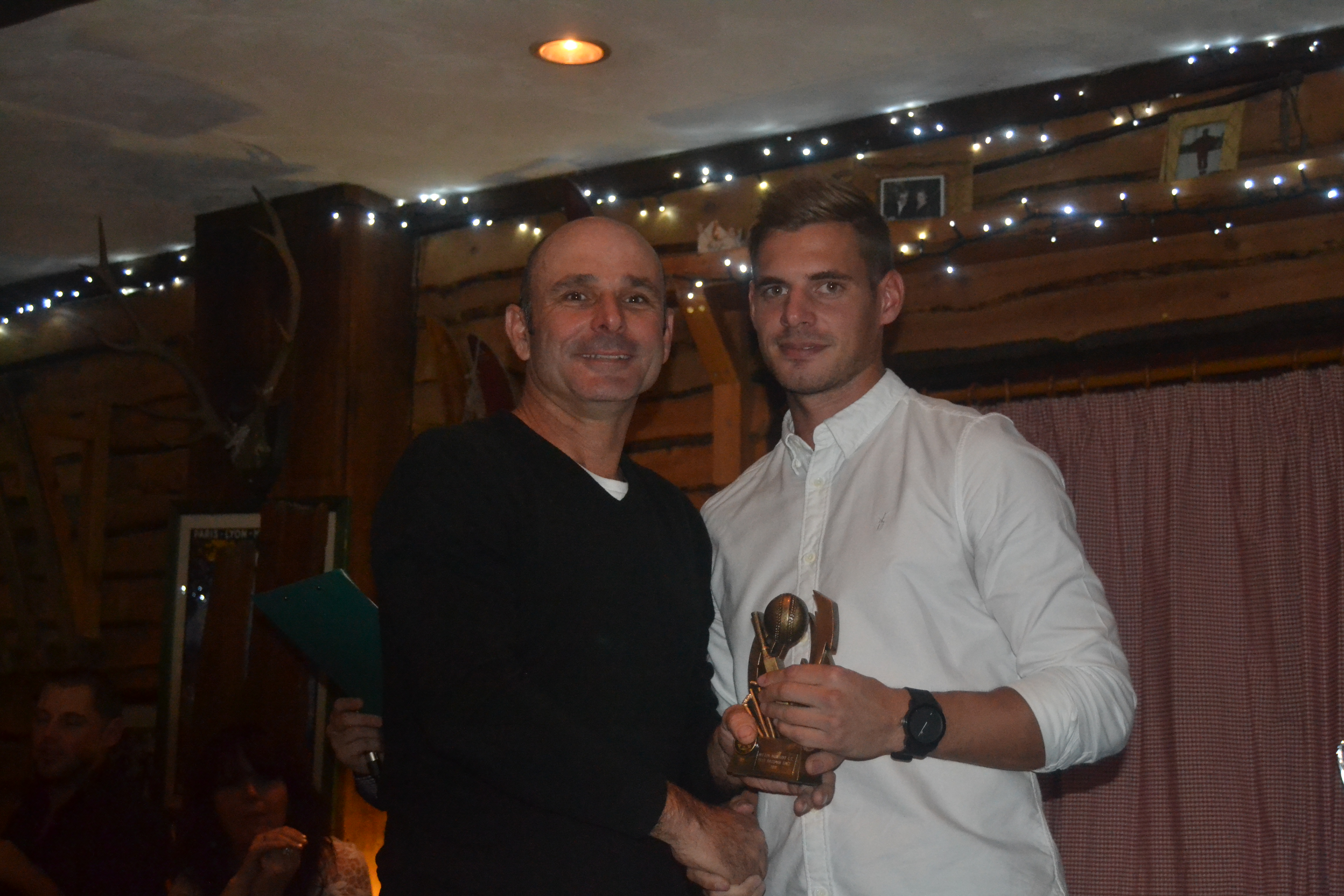 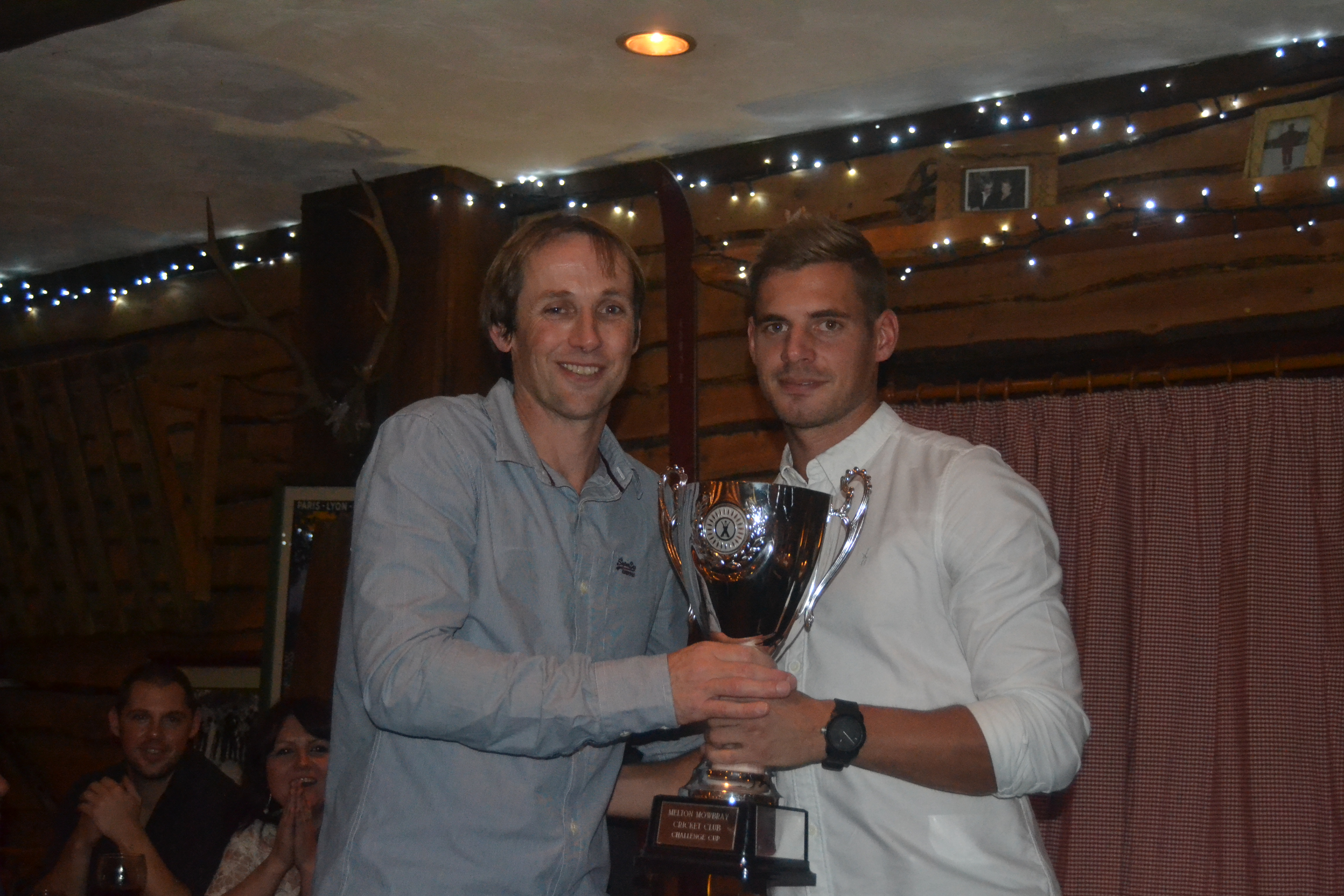 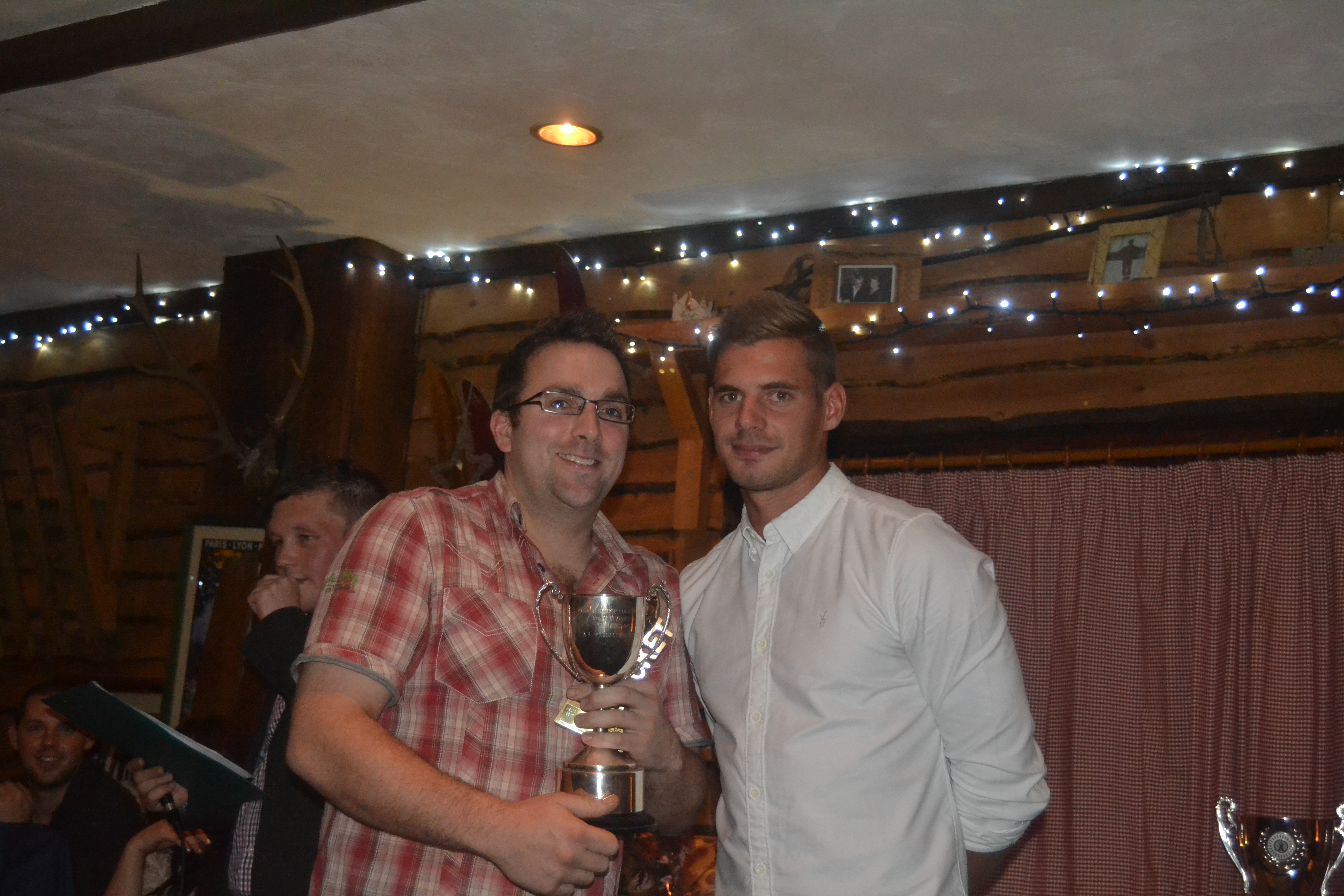 Sunday XI Batting: Pete Humphreys with an average of 47.2 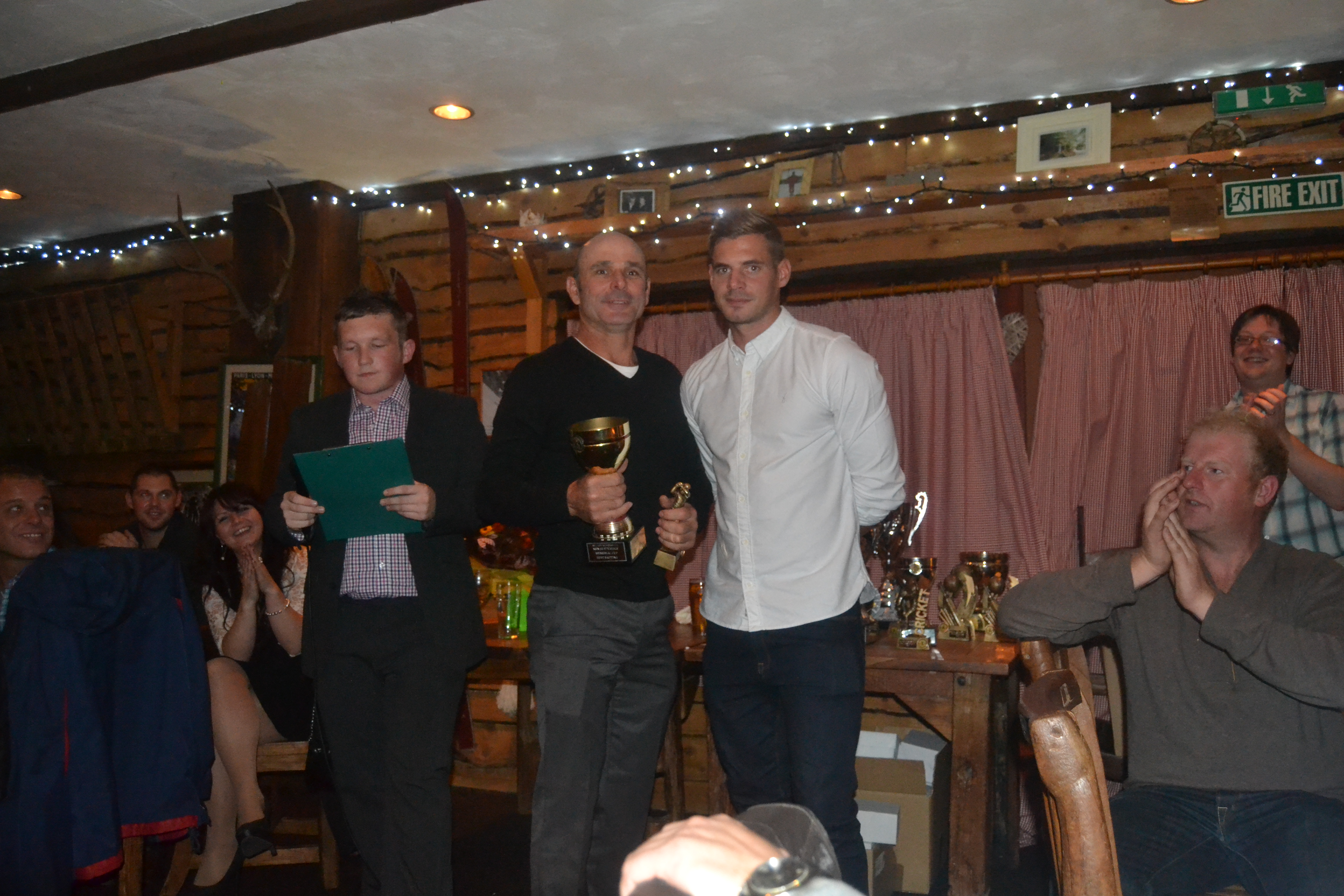 Sunday XI Bowling: Mick Whitfield 19 wickets at an average of 13.58 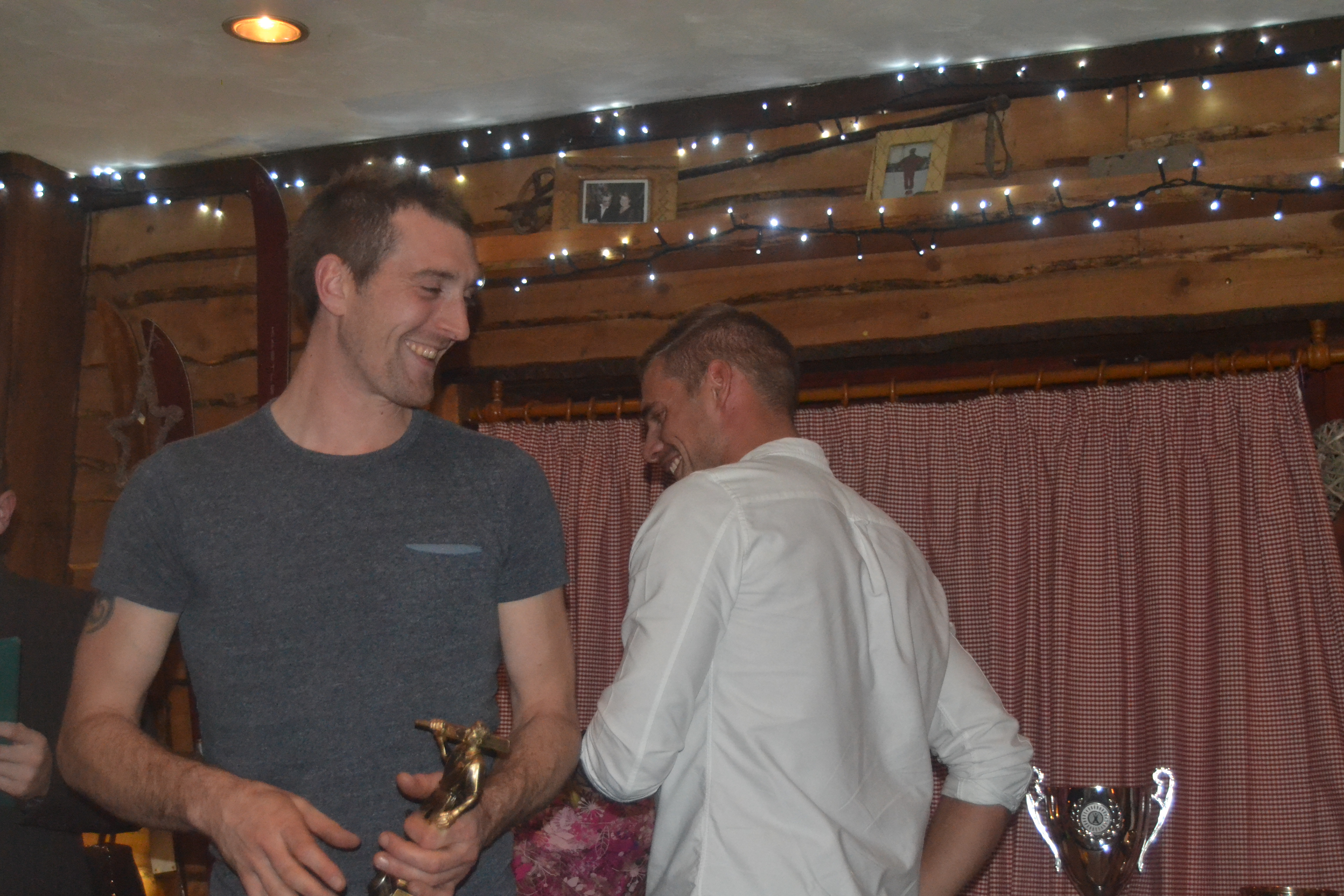 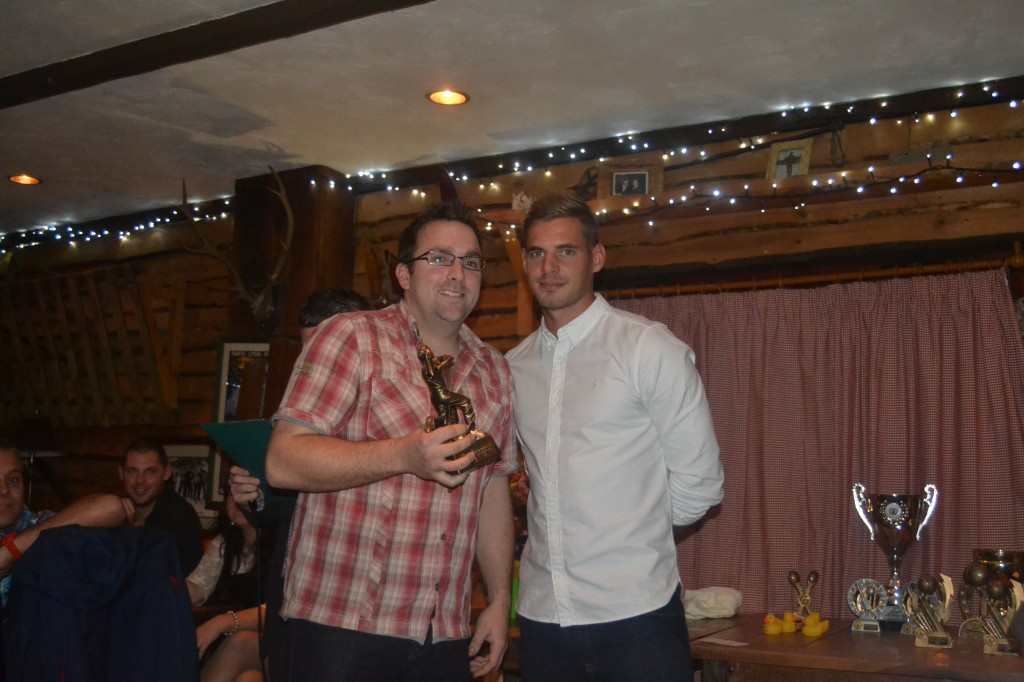 Rupert Smallshaw – Jonny spoke of Ruperts incredible commitment to the club investing many hours to run the clubhouse and bar. It was also noted that Rupert has won the ‘Clubman of the Year Award’ for 5 of the last 8 years.

Jonny Mac tempted the audiance with “WILL HE WIN IT AGAIN?, we’ll find out later on“ 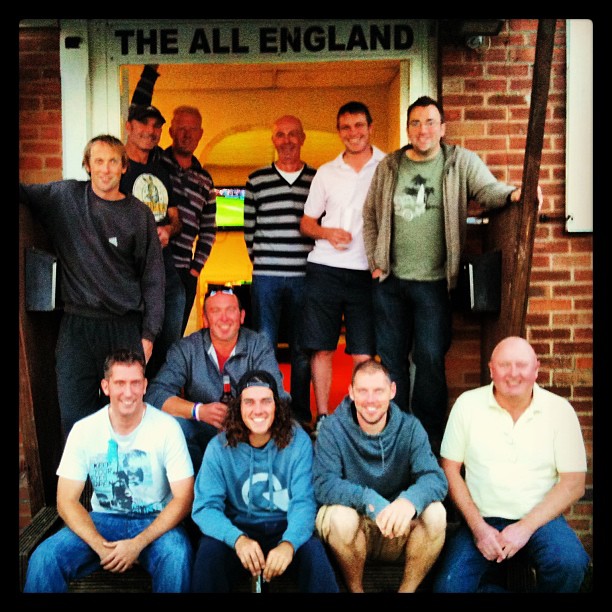 Tribute was paid to Harrison who played as our overseas player this year. The likeable Aussie joined to play whilst he was on tour. Harrison was part of an opening 200 run partnership with Ben Redwood. Harrison wasn’t there on the night as he had continued his tour.

Pete Humphries – Pete took over the Club Captain role mid way through the season. He also came along to junior presentations to talk encouragingly and passionately about junior cricket and the progress of the Club.

Darren Bicknell – Darren was not there tonight but there was a thank you sent out to him for his support and time that he had spent to help our Junior section along with Keith Tomblin who dedicated many weeks of indoor junior training before the start of the Season.

Darren Mackie – Darren was thanked for joining the club and taking on the highly responsible role of Welfare officer. 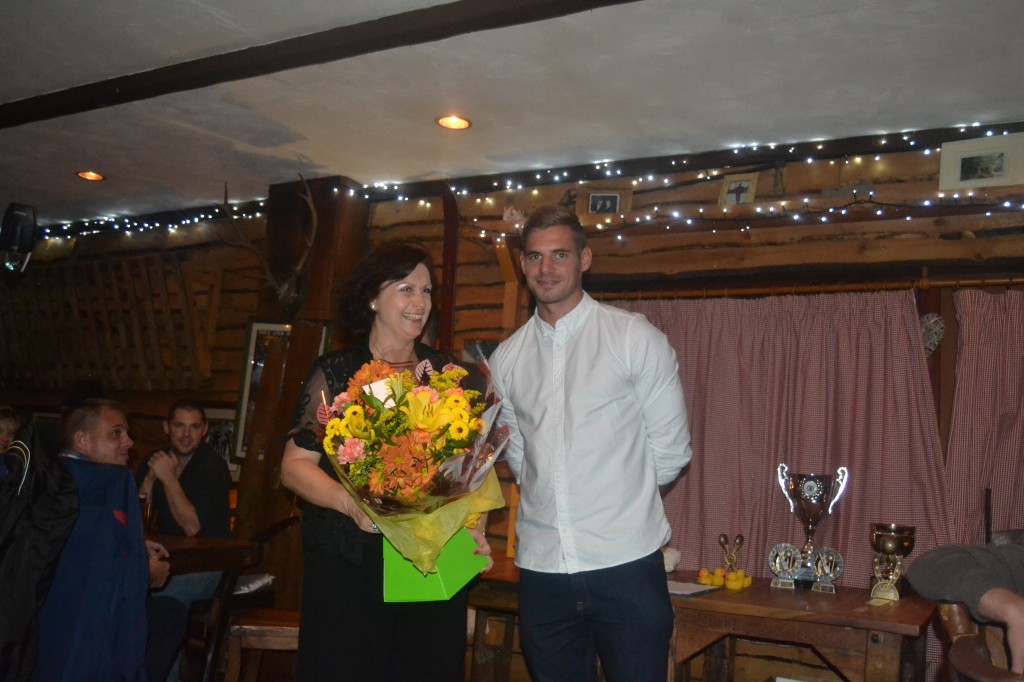 Jonny spoke of Pip’s work for the club, she’s been part of the Club for a few years now serving on two  committee’s and  has been a key Co-ordinator for Club events, fundraising, but also that she has spent a lot of the summer preparing the Cricket Tea’s which was very much appreciated.

Pip was assisted by her daughter Susie and there were some Thorntons chocolates for her too.

There was also chocolates for Diane Brightwell, Charlotte Hood, Marilyn Mabbott who had all helped out this year.

Kathy has been managing the Under 13’s side this summer but also worked very hard organising events,fundraising and sponsorship too. 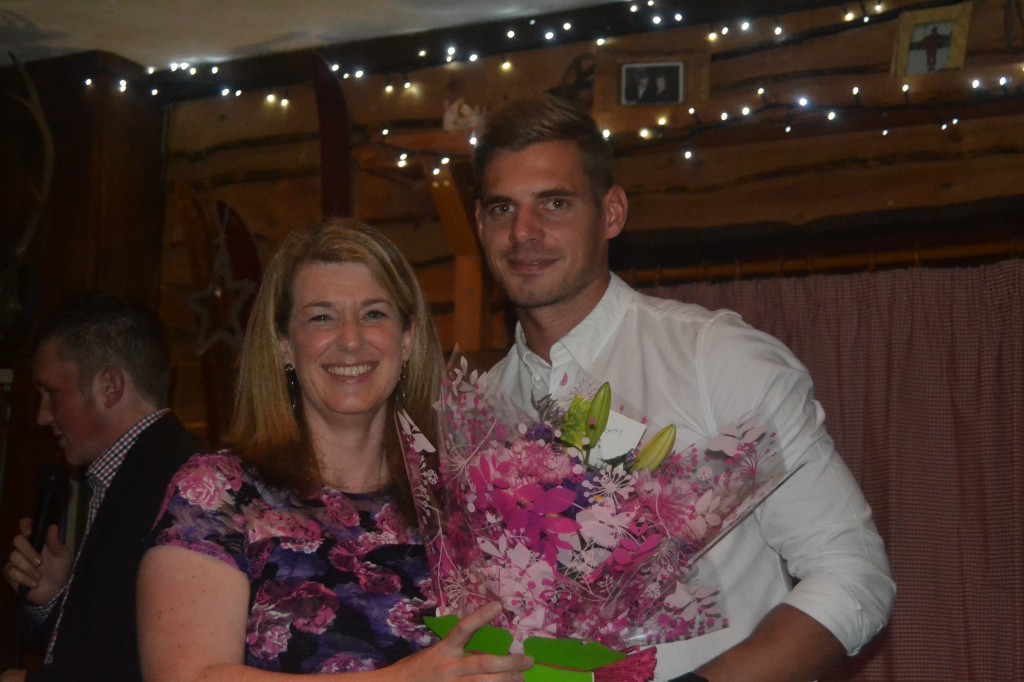 We have thanked both Pip and Kathy through the juniors but felt that she should also be recognised at senior event too.

Congratulations and thanks were also given to Karl Tew and Peter Hood for passing the UKCC2 Coaching course last winter. It was an essential part of the Clubs plans to move towards Clubmark and means that we are now self sufficient for training our players and juniors.

DUCKS! The final part of the night saw novelty awards of rubber ducks handed out to the four players with the most ducks this season.

Jonny Mac completed the evening with the ‘Clubman of the Year Award’.

He had hinted early during the evening that Serial Winning Clubman of the Year, Rupert Smallshaw was in the running again.

With more opposition for the title than in previous years it could have been a different result but with a clear majority of votes Rupert he took the prize and collected the trophy from Ollie. 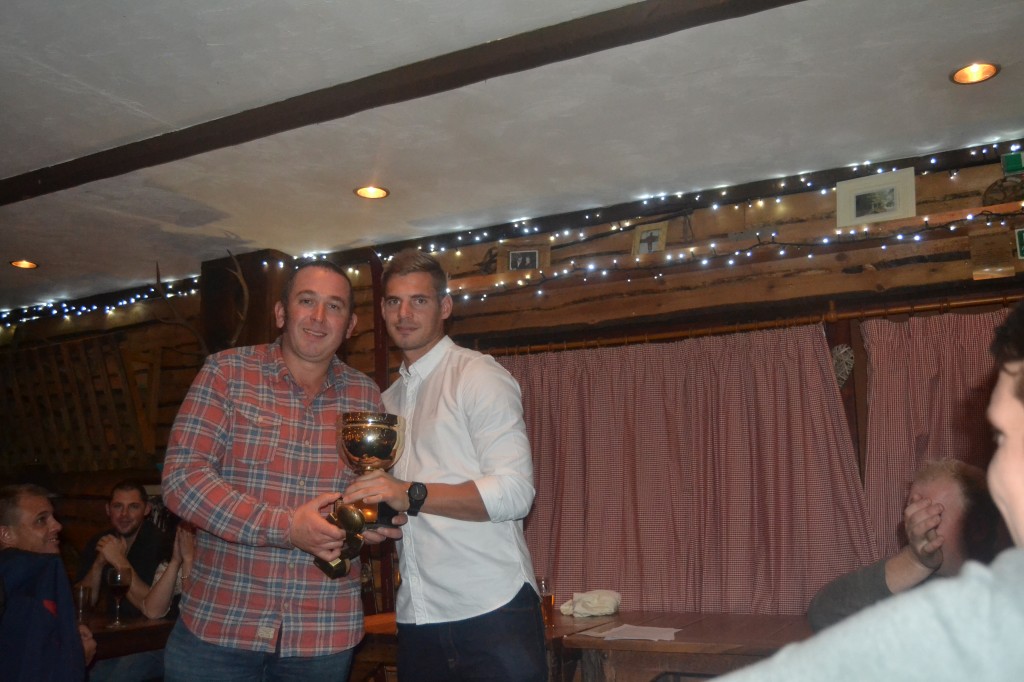 With the the final awards completed Ollie called for Peter Hood representing MMCC to come to the Stage to receive a Special gift of a Leicestershire County Cricket Club shirt that had been signed by Ollie and his team mates. 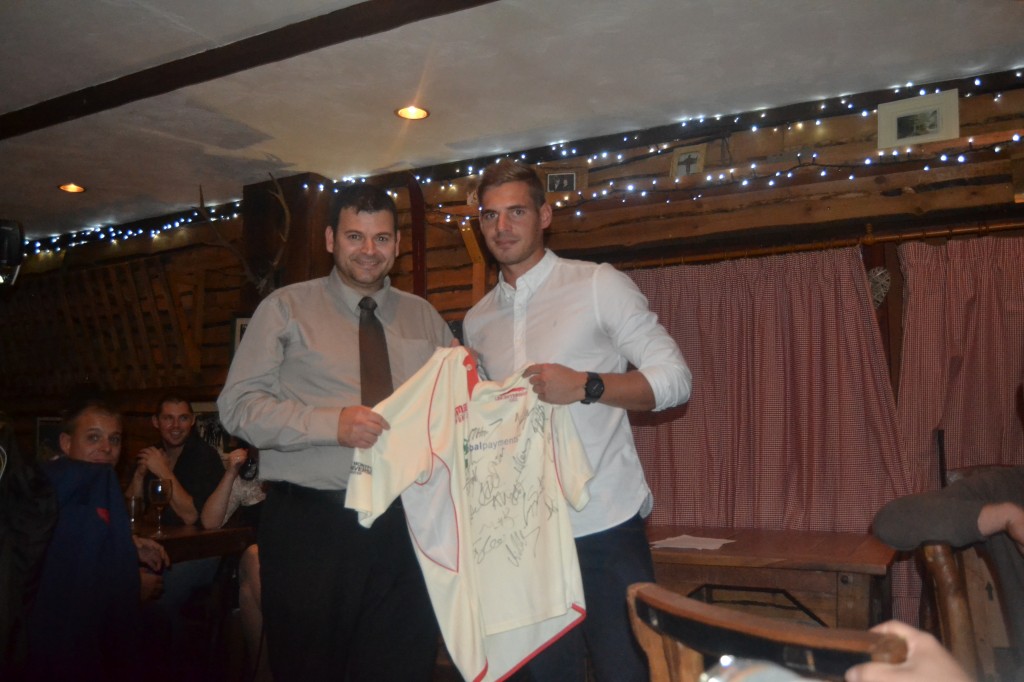 A big thank you to Jonny Mac and Ollie Freckingham for their making our Awards night very special.

Me and Leicestershire's new signing, @olliefreck – such a nice chap! All the best for the season! pic.twitter.com/cM1f0Lp6Au 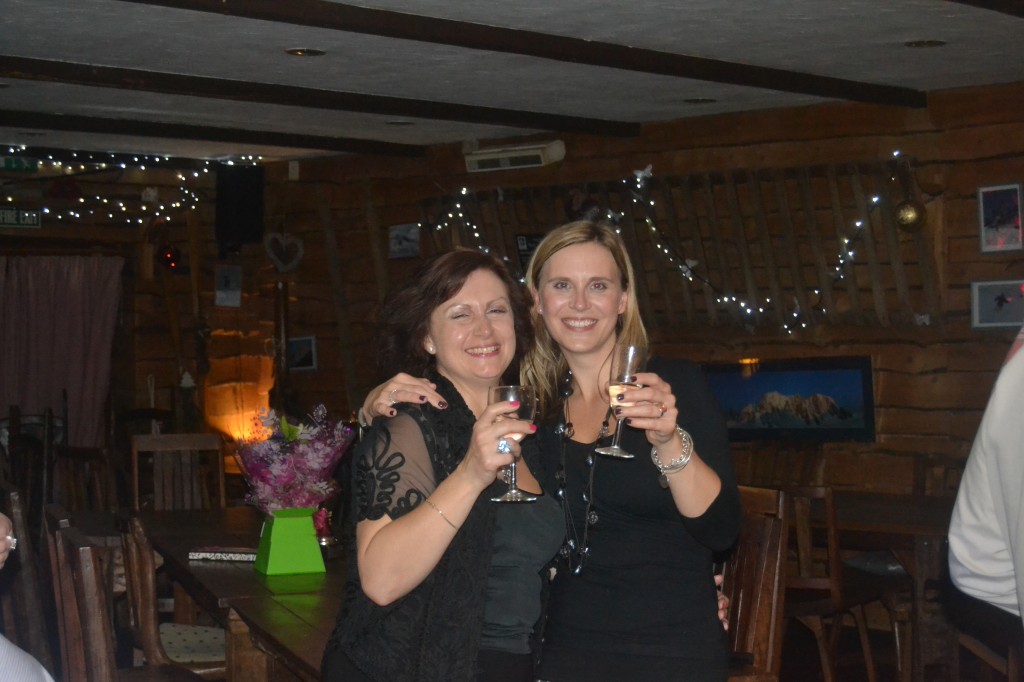 And a big thank you to everyone who has contributed to this year including Paul Stephenson, Greg Richardson and Gary Potter for their time on the ground, all the people that have jumped on at short notice including bar staff, Barry Hood for his numerous jobs running the Clubhouse including making sure we always have drink behind the bar. All the people that have submitted scores, written pieces for the paper, registered players for the respective leagues, these included Steve Freer, Mick Whitfield, Jamie Culy and Malcom Brown who submitted a large No. of the entries.

Melton Mowbray Cricket Club AGM is on the evening of

the All England Sports Ground

CTA – if you want to join Melton Mowbray Cricket Club as a player or volunteer or would like to assist us at the All England Sports Ground then you can contact Club admin at contact@meltoncricket.org or txt – 07977266729 and your details will be passed onto the Club Captain.